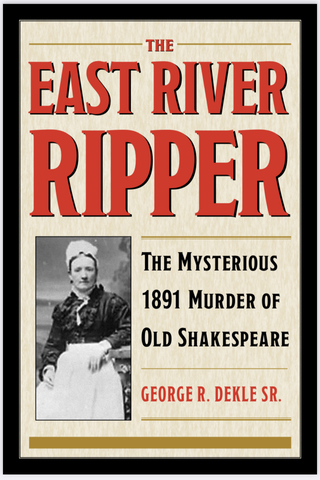 Shortly after NYPD Chief of Detectives Thomas Byrnes publicly criticized the London police for failing to capture Jack the Ripper, he received a letter purportedly from Jack himself saying New York was his next target. Not long after, Byrnes was confronted by his own Ripper-style murder case in the death of Carrie Brown, a.k.a. "Old Shakespeare," a colorful character who worked as a prostitute and had a penchant for quoting Shakespeare. Given the near-hysteria surrounding this vicious murder soon after the Jack the Ripper murders in London, people were worried that Jack might have actually come to America.

The detective bureau finally arrested Amir Ben Ali, an Algerian immigrant. The newspapers, however, immediately criticized Byrnes for moving too quickly, suggesting that he had tried to save face by pinning the crime on an easy target.

When the verdict of murder in the second degree was announced, the papers erupted in anger and disbelief. With the aid of the French consulate, they embarked on a 10-year campaign to have Ben Ali pardoned and finally won his release by producing new evidence. Immediately upon Ben Ali's departure for France, fresh evidence of his guilt surfaced.

Was Ben Ali falsely convicted or falsely exonerated? And if he did not commit the murder, then who did? Issues of false convictions, fake news, illegal immigration, police corruption, and racial prejudice are common tropes in today's news cycles. The East River Ripper demonstrates that these are not simply matters of recent vintage and seeks to answer such questions in trying to determine whether and in what way justice miscarried.