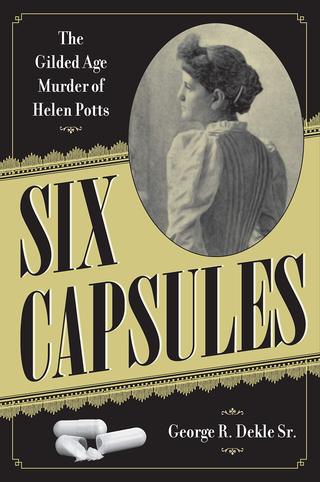 THE PERMANENT SOLUTION TO A WIFE'S CHRONIC HEADACHE

As Ted Bundy was to the 20th century, so Carlyle Harris was to the 19th. Harris was a charismatic, handsome young medical student with an insatiable appetite for sex. His trail of debauched women ended with Helen Potts, a beautiful young woman of wealth and privilege who was determined to keep herself pure for marriage. Unable to conquer her by other means, Harris talked her into a secret marriage under assumed names, and when threatened with exposure, he poisoned her.

The resulting trial garnered national headlines and launched the careers of two of New York's most famous prosecutors, Francis L. Wellman and William Travers Jerome. It also spurred vigorous debate about Harris's guilt or innocence, the value of circumstantial evidence, the worth of expert testimony, and the advisability of the death penalty. Six Capsules traces Harris's crime and his sub­sequent trial and highlights what has been overlooked—the decisive role that the second-class status of women in Victorian Era culture played in this tragedy.

The Harris case is all but forgotten today, but Six Capsules seeks to recover this important milestone in American legal history.

Chapter 1: The Sleep of Morpheus—Describes how Helen Potts died from morphine poisoning at the Comstock School in New York City, and how suspicion immediately fell upon her supposed friend, medical student Carlyle Harris.

Chapter 2: The Secret Marriage—Tells how Harris met and became infatuated with Helen and traces their romance up to and through their contracting a secret marriage.

Chapter 3: The Sacred Marriage—Describes how Helen's mother learned of the secret marriage and began pressuring Harris to enter into a "sacred [public] marriage" with Helen, a move which Harris vehemently opposed.

Chapter 4: A World of Concern for Harris—Recounts the aftermath of Helen's death: the coroner's botched investigation and inquest, the media firestorm, Harris's expulsion from medical school, and the bringing of charges against Harris with the District Attorney.

Chapter 5: Working Up a Case on Harris—Describes how Assistant District Attorneys Francis Wellman and Charles Simms reassembled the broken pieces of the coroner's botched investigation and were able to amass enough evidence to indict Harris.

Chapter 7: The Prosecution Case Week One—Describes the course of the trial through the first week. Critiques both the prosecution's presentation and the defense put up by Harris's attorneys,  William Travers Jerome and John Taylor.

Chapter 8: The Prosecution Case Week Two—Describes the course of the trial through the second week. Continues the critiques of both the prosecution's presentation and Harris's defense.

Chapter 13: New Evidence?—Tells how a new defense lawyer, William Howe, took over the post-conviction litigation and marshaled a host of witnesses who stood ready to testify that Helen Potts was a morphine addict who had killed herself with an accidental overdose.

Chapter 14: The Rains Commission—Describes Howe's media campaign to pressure Governor Roswell P. Flower into reopening the case. Tells how Flower submitted the case to a commissioner to give him recommendations on how to proceed with the case.

Chapter 15: The Curtain Falls—Tells the aftermath of Commissioner Raines's written report to the governor.

Epilog: The Carlyle Harris Case Today—Discusses how the Harris case might play out today in a modern courtroom with a modern forensic investigation.